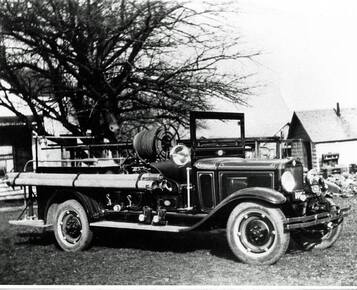 A little about our history...

The Cottage Grove news column in the Sun Prairie Star Countryman says that people met in the spring of 1911 and decided to buy a fire engine. That summer, they built the first fire station, 16′ x 24′, which was used until 1950. It has recently been restored by the Cottage Grove Area Historical Society, and rests in Firemen’s Park.

The first fire engine was a small, man-powered pumper that had to be primed and repaired at the scene of every fire. The string of buckets for the bucket brigade was loaded on the side of the unit. For 17 years, the hand pulled pumper was the only fire truck that Cottage Grove had.

Early Firemen were the store keepers, blacksmiths, mail carriers, carpenters, and farmers who lived in or near the village. Local telephone operators took an active role in securing help when someone said they had a fire. When direct dial came in 1933, a special line was established for the fire number. Four or five families had special phones where the fire number would ring. Each fireman had a list of firemen to call. During the 1950’s, there were usually about 15 calls a year. In 1968, there were 45 calls. By comparison, in 2006, the department responded to 195 calls, which required 1,882 staff man (and woman) hours to handle.

In 1928 the Cottage Grove Fire Department purchased its first motorized truck, a 1928 Chevrolet, equipped with a glass jar immersed in the water tank with a hammer. A fireman pulled a lever and the hammer broke the jar, spilling soda into the water which created a foam fire retardant. After each run, the tank had to be cleaned of the shattered glass and a new bottle inserted.

According to the Cottage Grove Bicentennial History, the Cottage Grove Fire Department officially came into being on July 11, 1929 with 25 members and one truck provided by the Township. The Department was incorporated ten years later under Chapter 180 of the Wisconsin Statutes. The first fire chief was Clarence Farr.

The third fire engine, a pumper purchased in 1950, was two feet too long for the original fire station, so the town and village purchased the old blacksmith shop (26 x 50) and raised the roof to accommodate the new truck. In 1957 the town meeting approved the purchase of a 1957 Ford fire truck, complete with hand hose and high pressure pump and nozzle. This new truck was housed in the town garage.
The Bicentennial History said that through the combined efforts of the firemen and the Township and Village, the following vehicles were added to the fleet: In 1962, a 1600 gallon tanker; in 1964, a 750 gallon pumper and a pick-up truck equipped for use at grass fires. In 1974, two 1500 gallon tankers and an emergency equipment van were added.

The Town and Village dedicated the third fire station with an open house on December 13, 1969. The building measured 60 x 80 and had four doors. Firemen’s meetings, originally held in firemen’s homes, the town hall, and town and village garages, were moved to the new station. It is now used as the Town garage.
​
The Town and Village built the present Emergency Services Building in 1997. The building is home for the Fire Department, Deer-Grove EMS, and Emergency Government Operations. The current fleet of vehicles includes an aerial ladder truck, 2 engines, a brush truck, 2 water tenders, a squad and a UTV. 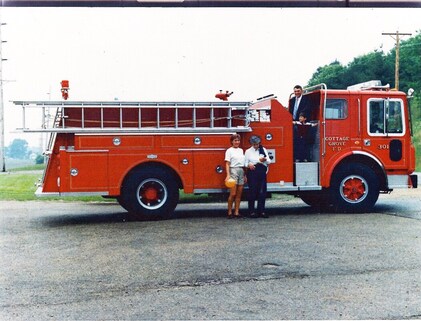